The spark of an idea

The technical journey of the eSkootr S1-X 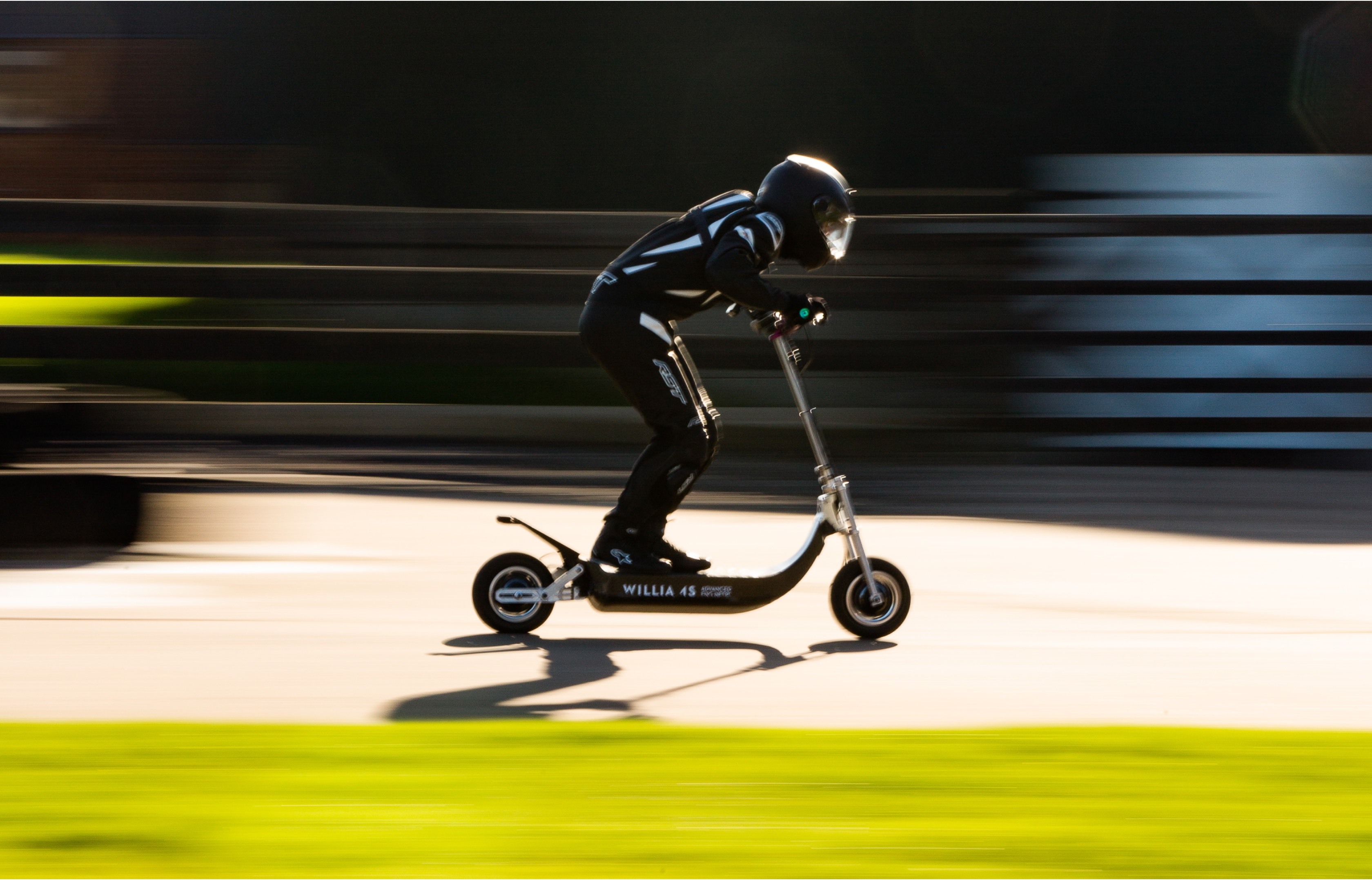 How do you establish a race series that has no existing frame of reference? Where do you start building a strong, safe electric vehicle that’s fast enough to wow race fans? And who do you call to start pulling all those disparate threads together?

When Hrag Sarkissian and Khalil Beschir founded the eSkootr Championship, it was clear that they would need to draw on many experts to fulfil their dream.

Central to the birth of the concept were ex-F1 and Le Mans racer Alex Wurz, who was appointed eSC Safety Ambassador, and Formula E champion Lucas Di Grassi, who became the series’ Sustainability Ambassador. With a like-minded group of individuals, they helped to pull together the eSkootr’s initial specification.

Without an existing race eScooter precedent, the team looked to the growing performance eScooter market to establish a benchmark spec.

Even at the top end of the market, a road-going high-performance scooter still requires compromise to handle the unpredictable surfaces and obstacles found in the real world.

A racetrack, however, has no bumps, kerbs or broken surfaces – so a race eScooter can travel even faster, which demands further adjustment to ensure stability at racing speeds.

The initial objective was to reach a top speed of 100km/h (60mph), on 400-1000m tracks built in city centres – effectively taking the baseline from a performance eScooter but significantly boosting it.

The primary aim was more power; then make the bodywork longer, lower and lighter to safely cope with speeds on a smooth racetrack surface.

With the demand for more power came the desire for eSC to have its own – rather than an off-the-shelf – motor. Given the 6kw power output specified by eSC, producing a sufficiently powerful motor within such a tiny package would be a challenge.

Wanting the ultimate performance for the eSkootr, eSC chose to run not one motor, but two – adding an additional motor to the rear wheel as well as the front. In the world of two-wheeled motorsport, this made the eSkootr almost unique.

Under the skin, the chassis design would also be new territory for such a high-performance eScooter. Additionally, the prototype design would need adjustable wheelbase, ride height and suspension tolerances – as all were unknowns. As testing commenced, rider feedback would shape the set-up and the eventual design of the final eSkootr.

The chassis needed to be strong and safe – both for handling stability and to protect the electrical equipment inside – so carbon-fibre was the material of choice. Safety for engineers and mechanics was also important, resulting in a safe nominal battery voltage level below 60v.

Electric scooters run with what are known as a hub motors – the motor sits inside the wheel, needing no chain or drive belt, but constraining the size of the motor to the diameter of the wheel rim. eSC’s motor is a brushless permanent magnet type, providing all the torque required within a tiny package.

Taking advantage of small Lithium Ion cells, the battery pack needs to be tightly packaged to fit inside the frame and provide the 1.5kW/h range needed for eSC’s heats and finals.

The use of twin motors also requires twin high current capacity inverters to transfer the high power levels from the battery. Again, these also need to be tucked away inside the chassis, with cables extending out to each wheel.

With 2 x 6kw power output, the eSkootr can produce 16hp – a not inconsiderable amount considering its 35kg maximum weight and the tight confines of the tracks upon which it

With two separate motors powering the front and rear wheels, there needs to be a system for the rider to carefully control the power. Delivering too much power to the front wheel during cornering can cause all sort of stability issues, so the engineers biased power delivery between front and rear. As the throttle is opened, it can be tuned to deliver slightly less torque to the front motor than the rear, keeping the eSkootr stable while ensuring rapid acceleration out of turns.

Power delivery is also split into two modes to help the rider control the scooter. The first is a conventional thumb throttle on the handlebar to increase power; but there’s also a boost butting – for maximum performance along the straights by instantly bringing the front motor up to full power.

Each hub motor is mated to a 6.5” wheel that can be fitted with a wide range of tyres using a number of slick and treaded compounds. These provide immense grip, enabling the eSkootr to corner with lean-angles of as much as 50 degrees.

For additional safety, the rider fits a lanyard to their wrist – it’s connected to a kill-switch, making the vehicle safe if rider and eSkootr go their separate ways in an accident.

Development of the prototype aimed to resolve two objectives; prove the powertrain and find a baseline set-up for the eventual production eSkootr.

Lead times for the bespoke race motor and the carbon frame were lengthy, and the eSC team wanted to start the learning process as quickly as possible.

That meant building an interim chassis – a one-off aluminium frame fitted with some off-the-shelf components to allow the team to test some aspects of the powertrain before the full chassis was ready.

Those first eight months continued to build pace and development at a rapid pace, as our timeline shows.

The series was announced to the public, and eSC named its first Rider Ambassador – Dakota Schuetz, better known as Kota, a four-time world champion scooter rider. An ideal test pilot. The first straight-line trials were completed at a proving ground before the team began its first track tests.

The first track tests took place in Bedfordshire, with the programme led by Technical Director Vinit Patel. Kota’s feedback proved incredibly useful, providing the engineers with a much richer understanding of the set-up and ergonomics needed to ride a 2WD eScooter at high speeds.

Only a month later, the project accelerated quickly: the prototype carbon-fibre chassis was completed and more straight-line and circuit testing was undertaken. These served to further prove the powertrain and to dial in the new carbon components.

As the calendar clicked over into 2021, and with the UK facing stricter COVID restrictions, the test team was still able to run the bespoke race motor in the new carbon chassis – running with both Kota and TT rider Joe Akroyd as well as other two-wheels riders. Late January saw the eSkootr fitted with the complete prototype aero package and the first race distances completed.

The full prototype is publicly revealed. This is still very much a v1.0 model that will be developed and iterated as eSC rolls out its 2021 Season Zero. Testing will continue into early summer before the design is built for the race teams. It’s clear, though, that this is merely the first step in an aggressive development programme – there’s plenty more to come!