The 24-year-old Italian rider follows in the footsteps of great female racers as she takes victory for Helbiz Racing in round two of the 2022 eSkootr Championship. 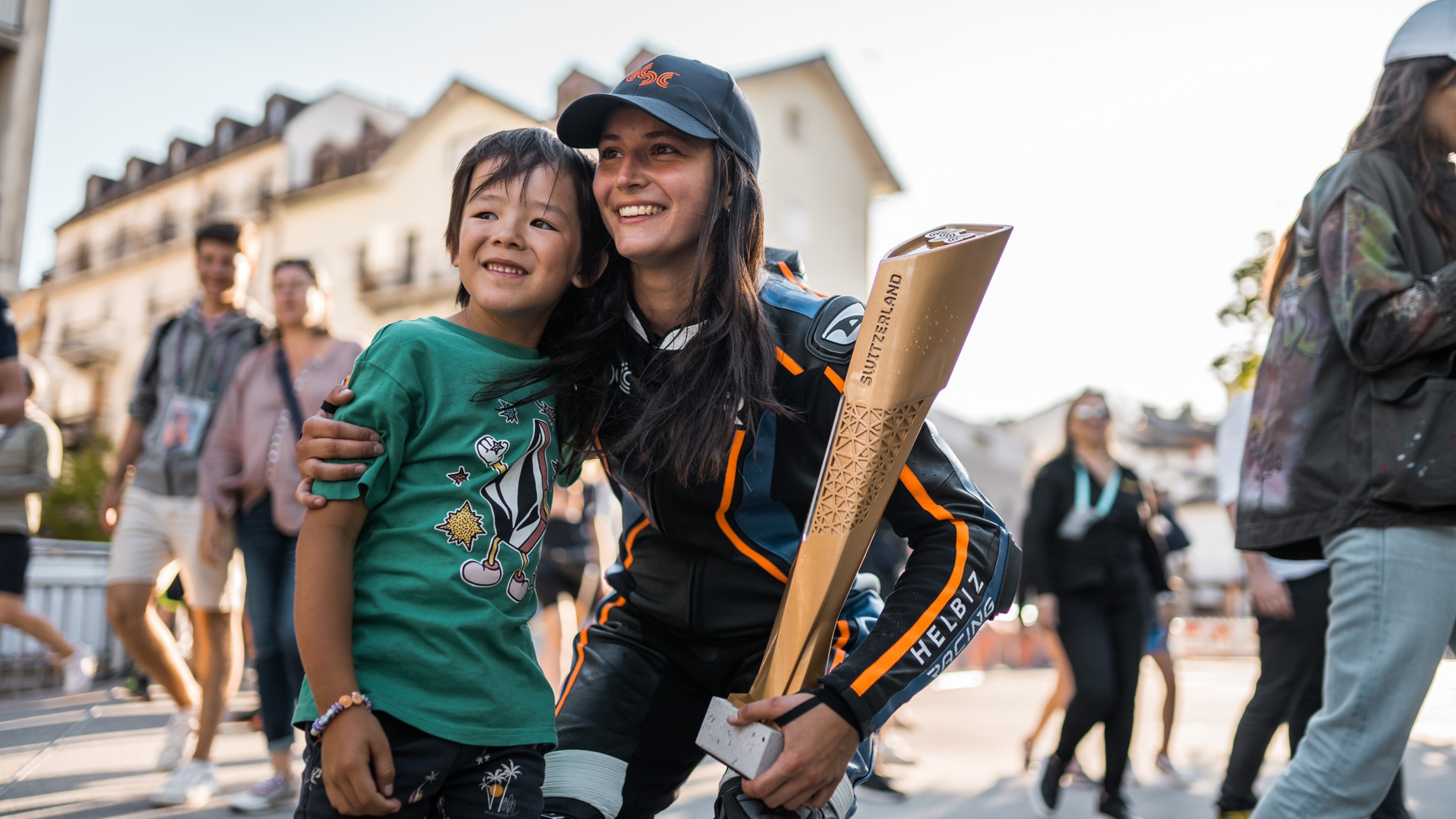 When Sara Cabrini crossed the finish line on the streets of Sion on 28th May, she created a piece of racing history. She became the first female winner of the world’s inaugural micromobility series. As Sara jumped off her S1-X eSkootr she was immediately surrounded by her joyous Helbiz Racing team-mates and fellow riders who celebrated her incredible achievement.

The 24-year-old couldn’t hide her delight as she had emerged through a series of competitive knockout heats to claim victory in the grand final and launched her bid to be the sport’s first-ever eSkootr world champion.

Nestled in the Swiss Alps, the beautiful city of Sion was the setting for this historic occasion, with spectators lining a specially built course to enjoy a new era of micromobility. The eSkootr Championship is a revolutionary new electric-powered scooter series that enables male and female riders to compete together on-track with an equal footing.

This new accessible and sustainable sport has been 18 months in the making and held its first two races in May. With a total of six rounds taking place on the streets of cities across Europe and the USA, eSC’s mission is to showcase the future of urban mobility and road safety through spectacular elimination-style racing.

Unlike much of the cost-prohibitive motorsport that exists today, this inclusive and competitive series is both fun and affordable. Thirty riders from diverse backgrounds around the world, race in 10 teams on city circuits at speeds up to 100km/h.

No other racing category in the world has the gender balance of eSC, as women riders make up nearly half of the field of entrants. For that reason, Sara’s victory on the world stage will inspire a future generation of female athletes who want to showcase their abilities on a level-playing field.

After impressing in pre-season testing, Sara’s speed and skill came to the fore at the first round in London, in which she emerged as the fastest woman competitor. After finishing second in her quarter-final, she was unfortunate not to progress from her semi-final after a last-lap clash dropped her out of contention.

“Although Sion was a more difficult track than London, I knew going into this round I had the speed to compete with the fastest riders,” said Sara. “Working closely with my mechanic Gianluca we were determined to find the best set-up for this track. Helbiz are a great team and the relationship between all of us is very special.”

As one of the first teams to commit to eSC, Helbiz are a world-leading manufacturer of micromobility transport. Founded in 2015 by Italian entrepreneur Salvatore Palella, the company produces three types of electric vehicles, including an industry leading e-scooter, which was the first of its kind to be introduced into Italy.

With that knowledge of the machinery, in combination with her talented team-mates Jordan Rand and Jamiel Guerchadi, Sara utilised the experience and know-how of her entire team to go one step better in the eSC’s second round.

Sara quickly adapted to the unique challenge of the Sion circuit and comfortably progressed through her quarter-final and semis. But in both heats, she was beaten by Marc Luna and the Spanish competitor started the final with three times as much boost as Sara. With just 12 seconds of extra power compared to Marc’s 40+ seconds, Sara was at a strategic disadvantage, but that ultimately made her victory even more impressive.

“When I finished the race in first position…. I had no words. It was incredible,” she said in the aftermath of the win. “I was tense and then Marc and I made contact at the end of the straight, but I said, ‘no, this time you don’t pass me!’”

On her slowing down lap she stopped at every corner to celebrate with all the fans that had turned out to watch the day’s exciting contest.

“The atmosphere was incredible,” she said. “Personally, I have never experienced anything like this before. I was stopped by well-wishers so many times before I could make it back to the pits. This was so amazing.”

Her celebrations were reminiscent of the scenes her hero Valentino Rossi would enjoy after one of his MotoGP successes — and he would have been proud of her brilliant performance on the day. Victory in round two puts the Italian rider fourth overall in the points standings just nine points off top spot.

Born and raised in the Tuscan city of Florence, Sara has been a fierce athlete her entire life. She was born in 1997, the same year that Valentino Rossi won his first 125cc World Championship. Growing up she was motivated to follow in her hero’s footsteps and she developed a passion for two-wheeled motorsport.

But racing wasn’t her first love. At school it was horse riding and also calcio — football — and even at a young age she didn’t shy away from competing against the boys, being the only female player in the team.

Prior to her involvement in the eSC, Cabrini demonstrated her speed and race craft in the Italian Dodici Pollici cup, racing mini-moto bikes. In combination with being a test rider for the Italian tyre company, PMT Tyres, she got a call-up to race in the Elf CIV Women's European Cup where she became rookie of the year in 2021.

Organised for 300cc motorbikes with races in Italy, Spain and Croatia, the two-wheeled category is an all-female contest similar to the four-wheeled single-seater equivalent W Series.

But as Sara proved in her footballing days, she is equally happy competing in a sport with gender equality. She follows a long line of female racing heroes who have taken on and beaten the best in racing and wider motorsport.

Behind the wheel, one of the very best exponents in the realm of World Rallying was Michèle Mouton. She was the last woman driver to compete in the pinnacle of rallying and scored four victories in addition to finishing second in the Drivers’ Championship in 1982.

More recently, American racer Danica Patrick has triumphed in both the IndyCar single-seater championship and in NASCAR. She is the only woman to win in IndyCar and set pole position at the showpiece Great American Race, the Daytona 500.

Another full-time IndyCar driver who has displayed great talent on the global stage is Swiss racer Simona de Silvestro. In addition to time spent testing in Formula 1, she also became the first full-time woman to compete and score points in the all-electric FIA Formula E World Championship.

It’s only fair that Sara Cabrini can now be spoken about in the same breath as these other female racing legends, for her remarkable achievement in the early days of this brand-new, exciting competition. For this new series to be both inclusive and accessible is a credit to the collective visions of the eSC co-founders: Hrag Sarkissian, Lucas Di Grassi, Alex Wurz and Khalil Beschir.

“eSC is part of a bigger picture,” he adds. “Sport should be for all, and we want to provide the world's most accessible and inclusive racing championship with riders coming from all areas of society.

“We want everyone to have an equal opportunity to try our new sport and to aspire to be a future World Champion. With Sara’s victory in Sion, we’ve seen how inspiring her performance was. That should encourage more people from whatever gender or place in society to take part and compete in sport.”

As she sprayed the champagne from the top of the ramp on the Sion podium, Sara was congratulated by her fellow competitors in second and third place. They knew they had been beaten by the best rider on the day – they also knew they were witnessing a piece of history.