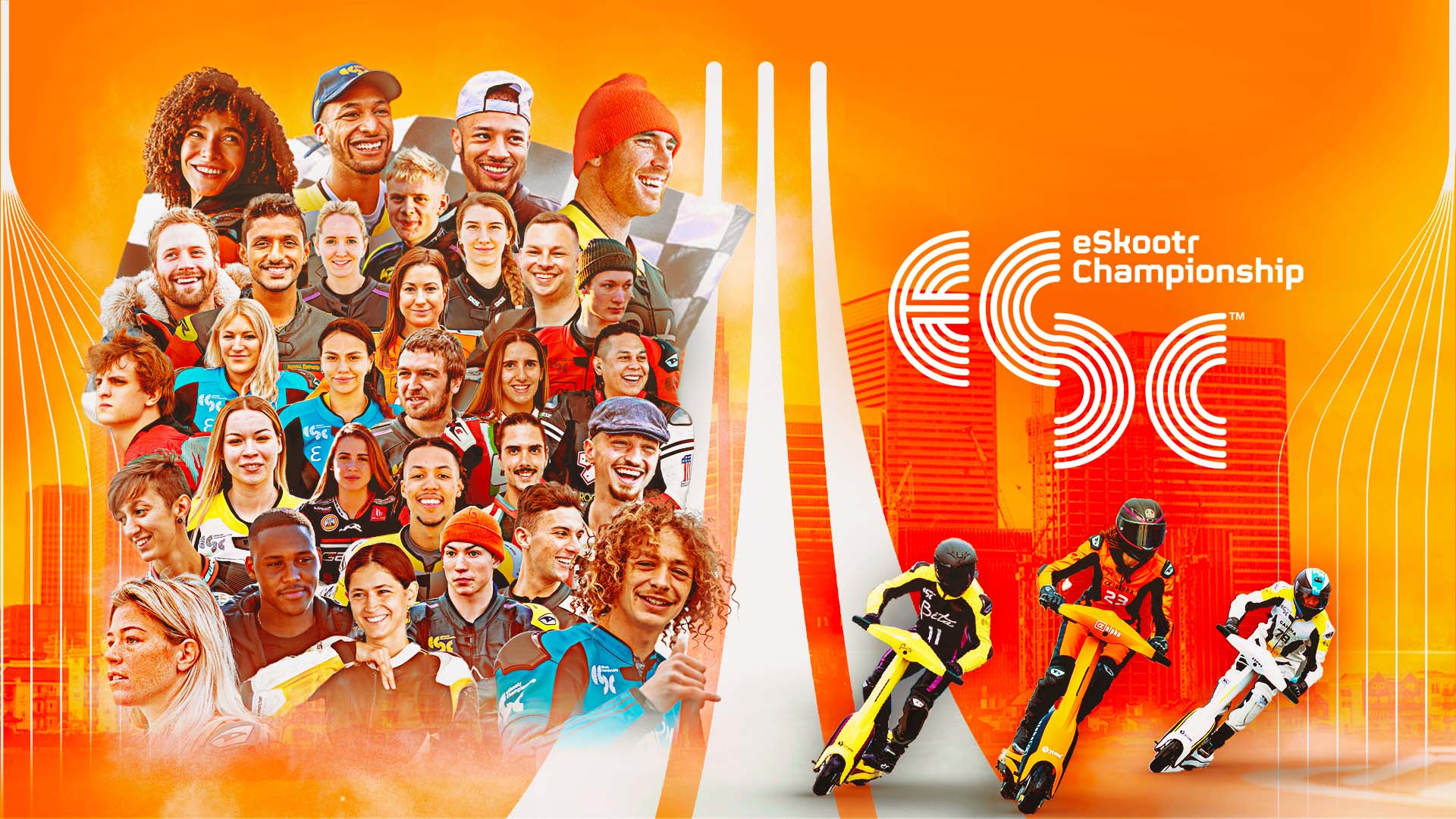 Plans for the inaugural round of the brand-new eSkootr Championship were revealed at a launch event held today at The Shard, where a number of the riders joined eSC’s co-founders in providing a taste of the unique racing experience spectators and TV viewers from around the world can expect in six weeks’ time.

Located in the heart of London, Printworks London was selected as the venue to reflect eSC’s mission to inspire a new movement for safer, sustainable and more liveable cities. eSC is a fan-first sport and its race locations will provide the perfect backdrop for a spectator and entertainment experience like never before, with each event embracing the cities’ urban culture and associated lifestyle.

Creating a new sport means new sporting heroes and eSC’s vision is for the world’s most inclusive racing series, both in terms of the riders’ sporting background and gender. More than 500 athletes applied for the eSC Rider Programme in the 12 months since it was launched. An intensive period of testing and training culminated in the selection of the final 30 riders, announced today, who will compete in 2022. They will now be selected by the 10 teams entered in the championship through a rider draft.

Coverage of the world’s first micromobility racing series will be available to view via eSC’s network of broadcast partners in over 100 territories worldwide with a projected reach of over 350 million homes, as well as for free on the eSC fan hub.

As a brand-new sport, social media will play a vital role in building a fan base for eSC and driving anticipation for the upcoming season. Through a new eSC Fan Hub launching next month and the Championship’s Instagram, YouTube and forthcoming TikTok channels, eSC will inform, excite and engage new fans and connect with young audiences in new and interesting ways.

eSC also plans to engage key players in micromobility, transport and sports governance through an event aimed at shining a light on how public policy can support the development of micromobility.

More details of the music and related events will be announced soon.

“We are delighted to announce that the iconic South East London venue, Printworks London, will host the first ever eSkootr Championship race in just 6 weeks’ time.

“This venue will enable us to bring the world’s first micromobility sport to the heart of urban London, emphasising eSC’s commitment to reimagining the racing experience for the fans, and at the same time developing the conversation around safer, sustainable and more liveable cities.

“Today we can also announce the 30 riders from around the world who will be competing in the inaugural Championship. The riders have come from a range of sports, including multiple World Champion and Olympic speed skater, Elise Christie and Olympic snowboarder Billy Morgan, monster truck racer, Ami Houde, and BMX rider Tre Whyte.

“Our final rider pool have been through intensive testing and training and beat over 500 other elite athletes to be selected for season one. We’re proud of the work they have put in and incredibly excited to see them compete on the track in May, and throughout the year.”‍

“The location for our first ever event is Printworks London, and we have conceived a specially designed racetrack that will run both inside and outside of the venue, creating a truly unique viewing experience for fans.

“Riders will race around the track at speeds of 100km/h on the S1-X eSkootr. They have been going through numerous testing and training events and the 30 selected for Season 1 are all pushing themselves and the eSkootr to the limit.

“With our riders coming from such diverse backgrounds, we have seen different styles and techniques emerging – a fascinating dynamic that is one of the hallmarks of our new sport and will make for incredibly exciting and unpredictable racing.” ‍

“We are all incredibly excited about the first race of the championship at Printworks London on 13/14 May. It will be a fantastic venue for racing and the perfect backdrop to launch the series.

“Creating a completely new sport has been a complex but very rewarding process and ensuring the safety of everyone involved has been our priority. Track and road safety is something I have become heavily involved in since I stopped racing, and as well as rider safety, we are putting a lot of resource into transferring our learnings from the track into consumer micromobility. We look forward to bringing our vision for a sport with purpose to life in 2022.”

“After almost two years of preparation, we’re just weeks away from the start of our brand-new sport, which gets underway at Printworks London.

“We’ve been working hard to create a racing series that will excite and engage audiences, but also promote a wider purpose. I am a passionate advocate for greater sustainability in motorsport and global mobility, and I’m proud to say eSC has been carbon neutral since inception.

“We will use our racing to help advance the technology, safety, and regulations of everyday e-scooters, and to create debate around micromobility and its benefits for more sustainable and accessible urban transportation.

“We can’t wait to introduce fans to eSC and our incredible and diverse rider line-up, and take them on our journey.”

“It’s an amazing feeling to say I’m a professional eSkootr rider. When I first heard about the sport and after conversations with eSC, I began to realise what an incredible opportunity it could be to be part of something so special. If testing is anything to go by, the racing will be breathtaking, but it's also the Championship’s vision for using sport as a platform for more sustainable mobility in cities that I’m proud to be a part of.

“From competing on skates, I enjoy racing in close proximity to other competitors and think fans will be surprised by how close we get to each other on track in eSC. That, combined with the speed and the lean angle of 55° will make for incredible viewing and I can’t wait to get out and start competing at Printworks in a few weeks’ time.”

“After almost six months of training and testing, it’s amazing to say I will be competing in eSC. When I have spoken to friends and family about the series, they are all incredibly positive and see how exciting it will be, so it’s a great feeling to know I’ll be on the start line when the series begins at Printworks London in May.

“I come from a BMX background, so adjusting to standing when racing has taken some getting used to. Races only last a few minutes, but the demands the eSkootr puts on your body requires a lot of strength and balance. It's a very physical sport and I’ve been so impressed by the different skills and attributes each rider has brought from their individual discipline. All of us have slightly different styles and techniques, taken from our own sport, and that will make for great racing and fascinating viewing.

“All of the riders have been getting on in training and are constantly pushing each other to improve. However, we all come from professional sporting backgrounds so I’m sure we’ll see some the competitive side emerging when we’re out on track.”

eSC is a brand-new category of sport with the championship’s first races taking place in 2022. It will be accessible to all and promote the use of sustainable micromobility transportation in urban areas. Riders will race the specially designed S1-X electric scooter, which has been developed by YCOM, is powered by a Williams Advanced Engineering battery, and can reach speeds of over 100 km/h, on unique inner-city circuits.

Since opening its doors to the public for the first time in February 2017, Printworks London has become one of the city’s most celebrated venues. Renowned for their seasonal music event series and cutting-edge production, the venue also plays host to a wide range of corporate events, conferences and product launches as well as location filming for big screen productions such as The Batman (2022).