The first-ever winner of the brand-new eSkootr Championship™ (eSC) has been crowned after a thrilling series of races in London. 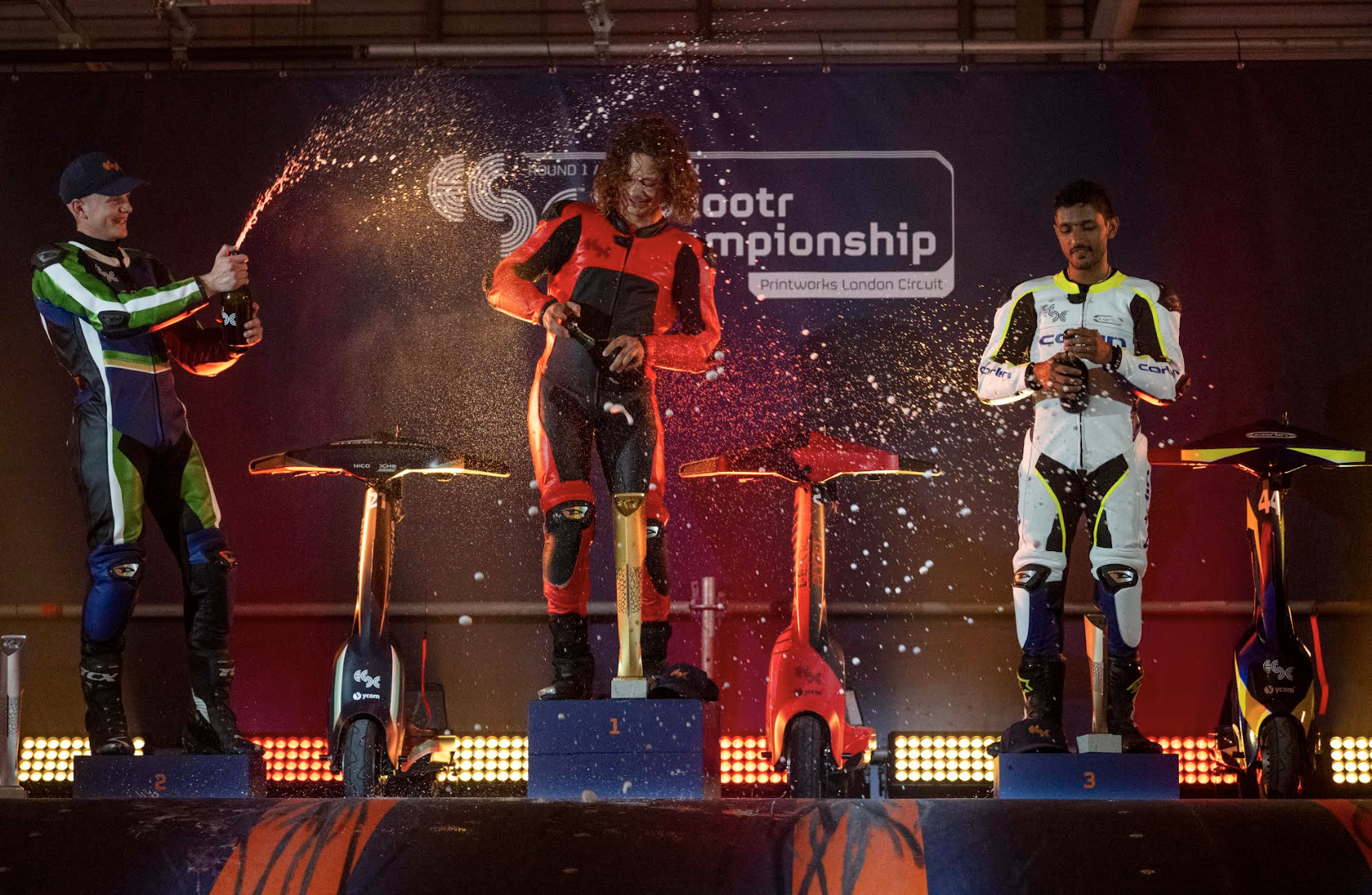 The first-ever winner of the brand-new eSkootr Championship™ (eSC) has been crowned after a thrilling series of races in London. Swiss racer Matis Neyroud (PLYR:1) took the lead at the start of the final and led all nine laps to beat British rider Dan Brooks (Nico Roche Racing) by just 0.777 seconds. Joining them on the podium was Carlin’s Indian-born rider Anish Shetty.

A packed crowd lined the 12-turn, 470-metre course laid out in and around the industrial setting of Printworks in Surrey Quays. The London venue played host to a series of knockout races contested by 30 professional male and female athletes who hailed from a diverse range of backgrounds to compete in this inaugural event.

The eSkootr Championship marks a new era for micromobility in sport with an emphasis on sustainability, road safety and transportation in urban areas. All the riders compete on specially built S1-X eSkootrs powered by two 6kW motors and capable of speeds over 100km/h. With the course split between a floodlit route inside the former largest printing press in Europe and a sunlit cobbled track outside the building, the riders who come from a mix of sports such as freestyle scooter riding, snowboarding and motorbike racing, enjoyed an intense day of competition that culminated with the crowning of the round one winner.

Swiss rider Matis Neyroud hails from a background in freestyle scooter riding. He took first position in the final and at half distance held a commanding 2.2 second lead. But after running out of boost power, he was slowly reeled in by motorbike racer Dan Brooks who closed the gap to 1.1 and then just 0.7 seconds as they started the ninth and final lap. It was an exciting end to a thrilling day’s racing. Kilian Larher (Nico Roche Racing) was fourth ahead of Aymard Vernay (Racing Citizens) and Murphy Scooters’ Dakota Schuetz.

"I used up a lot of boost in the Quarter Final when I didn’t need to, but luckily when I reached the final I still had 40 seconds,” said a delighted Neyroud after the race.

"Coming into that last lap, my legs were so tired that I was really holding on at the end. It was lucky we only race for nine laps because if we went for 10 it might have been a different story. I will be working hard to make sure I’m more prepared for the next round.”

This new era in micromobility began with a series of six heat races taking place on the part-indoor course on Saturday afternoon. In a format whereby the rider in last place was eliminated after nine laps, the top five progressed into the quarter final, with the semis and final taking place later on Saturday evening.

The first semi-final was won by Neyroud after a thrilling battle between the PLYR:1 rider and Carlin’s Shetty. For lap after lap the pair swapped positions at the head of the field in a duel that kept the London crowd entertained. Shetty had initially taken the lead off the start and behind him early on was Wilfred Njunga — but the latter made a mistake which caused his scooter to flip around and he was forced to retire.

On the fifth lap, Neyroud took the lead from Shetty but the Indian re-passed his rival on the next lap. Another lap later and the Swiss had brilliantly wrestled the lead off Shetty once more. This was the battle of the day. Further back a spirited drive from Carlin rider Danny Skinner brought him from the rear of the pack and into contention. But a problem on the final lap forced the local rider to run wide and he missed out on the chance to reach the final.

In the second semi-final, it was a Nico Roche Racing 1-2 with Kilian Larher leading his team-mate Brooks across the line. The Frenchman led all nine laps with Brooks moving into second on the opening lap when he passed Claudio Corti into Turn 5. Corti took third overall but only after a final lap incident between Sara Cabrini and Luke Hedger. Yesterday’s fastest rider in practice was running fifth for much of the race, but attacked Cabrini into Turn 2 on the final lap. Cabrini lost control and Hedger ran wide losing his chance to compete in the final.

Earlier in the day, there were a series of heats then quarter finals that kept the London spectators entertained throughout the afternoon. The first quarter final was won by Shetty who finished comfortably ahead of Wilfred Njunga (258 Racing) by 5.7s. Shetty’s Carlin team-mate Nicci Daly was eliminated at this stage after unfortunately crashing off the start along with Chelsea Gowland (who also went off on the opening lap). Nico Hulkenberg’s 27X team racer Maria Bellot failed to make the cut, but Spanish racer Marc Luna (Murphy Scooters) took third and did progress.

Neyroud took the lead at the end of the opening lap in the second quarter final and wasn’t headed again in the eight-lap sprint. He took the chequered flag with a six second lead over Vernay. Behind them Skinner had an exciting race batting with Los Rayos’s Jessica Howden. He managed to find a way past Howden in the latter stages of the race to take the final spot on the podium.

There was drama in the third quarter final when an accident for former Olympic snowboarder Billy Morgan caused fellow Brit Luke Hedger to crash into him. With both eSkootrs on the ground and both riders recovering to resume their place in the race, it was decided to red flag the race.

"I'm not sure what happened,” said Morgan. “Some of the guys have better racecraft than me, but I knew Luke was behind me. I looked over my shoulder I had to push myself to the limit. I did that and crashed. I thought it was game over, but we managed to get another shot.”

Corti was originally leading Larher before the stoppage, but with every rider called to the ramps — a restart got underway with a frantic three-lap shootout to the flag. Corti and Larher finished on the podium but the biggest beneficiary was Hedger who went from crashing to winning. Sadly, Morgan couldn’t recover as well and could only manage fifth.

In the final quarter final, Brooks (Nico Roche Racing) made a daring move to take the lead from Alexis Letellier into Turn 5 on lap six. The SICK! Racing rider had been in the lead from the start, but Race Control had determined he would lose two positions for his jump start. Sara Cabrini (Helbiz Racing) finished second ahead of freestyle scooter legend Dakota Schuetz.

The next round takes place in the Swiss venue of Sion in two weeks’ time.